I wrote this review of Allucquere Rosanne Stone’s book many years ago when it was first published. As I struggle with the adversarial nature of discourse today, wondering how we could have travelled down this road so far without becoming aware of the dangers of our thinking, I am reminded of those who saw the glimmer of what was to become of the blending of man and machine. In many ways, it’s like rereading Orwell’s 1984.

According to the jacket copy of The War of Desire, this book challenges the “traditional roles of gender identity.” Amazon.com’s own review focuses on “gender and identity.” While these remarks are certainly true, neither comment reflects a real understanding of Stone’s overall message. That’s a shame, because this is one powerhouse of a book if you’re interested in the big picture when it comes to the effects computers and interactivity are having on our social communication. 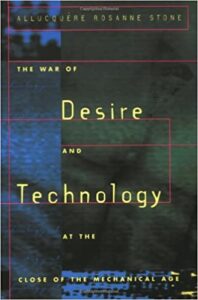 Stone is an Assistant Professor and Director of the Interactive Multimedia Laboratory at the University of Texas at Austin. She defines interactivity as implying “two conscious agencies in conversation, playfully and spontaneously developing a mutual discourse, taking cues and suggestions from each other as they proceed.” (p. 1). She suggests that because our mechanical age is so steeped in the work ethic, we tend to regard computers merely as tools, overlooking the fact that computers are much more than this.

As with all powerful discourses, their very existence shapes us. Since in a deep sense they are languages, it’s hard to see what they do, because what they do is to structure seeing. They act on the systems — social, cultural, neurological — by which we make meaning. Their implicit messages change us. (pp. 167-168).

This interactivity provides the means for an “arena for social experience.” As such, it becomes what she calls a technological prothesis.

In building her points, Stone covers a number of the classic computer stories: the shakeout at Atari, various hacker stunts, and of course, DARPA. Her focus, however, is not merely another historical account, but how these developments changed the way people work and companies operated.

Her book is really an analysis of this new discourse which has developed because of computers. A discourse which many tend to believe levels the playing field because conversation occurs over computer connections without voice or physical appearance, and hence appear to be liberating, or seemingly gender neutral. Stone warns, however, that to be misled by this assumption is to misundertand how power works. The virtual community, she reminds us, requires “high levels of skills in the English language and a high technical proficiency, but this annoying fact usually passes unremarked” (p. 181).

The mechanical age, Stone tells us, used visual knowledge to ground and authorize sovereign subjectivity. The discourse which occurs between people by means of the computer shapes their lives in a new way. The body no longer speaks, but becomes the spoken, that is “not we but our culture speaks through our mouths,” (p. 107), and Stone considers this a very frightening situation. She likens this new role to that of a boundary creature, similar to Anne Rice’s vampire Lestat, noting the pain a boundary creature undergoes in attempting to adapt to a culture and lifestyle not its own.

Unlike Richard Brodie in Virus of the Mind, Stone can handle this awareness of the dangers a new communication modality can introduce into a society which is moving from a mechanical age into a technological one without crying wolf. Brodie, on the other hand, by labeling this kind of thinking a virus of the meme, emphasizes the negative. Indeed, Brodie becomes so fixated on the naming of something we have no name for, that he misses what is perhaps the importance of it all.

Stone, on the other hand, schooled in dealing with multiple threads in many different formats, overcomes this mechanical age’s compulsion to name and thereby control, and expertly manipulates images to suggest that for which we have no name. Because we don’t see these computer discourses, we have difficulty understanding how they structure our physical seeing, bringing us messages that change us. Stone likens this phenomenon to video game vampires and calls this the vampire of subjectivity :

…that such vampires do exist is for me the challenge and the promise of virtual systems. The war of desire and technology is a war of transformation, in which if we look deeply enough, we can make out our own vampire future. Ultimately, the gaze of the vampire is our own transfigured and transfiguring vision. (p. 183)

Brodie considers the transformation to a higher level of thinking more in terms of disease than transfiguration. Stone understands the great possibility for good as well as evil in the kinds of transformations which are occurring, but the focus of her vision remains positive. “Claiming that vision,” she tells, us, “is our task and our celebration.” (p. 183). 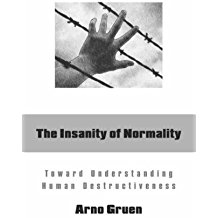 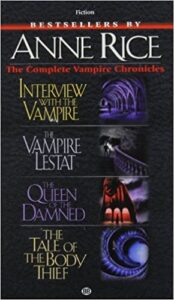